THE FRENCH-RUSSIAN RELATIONS: WHAT DO THE FRENCH THINK?

At a time when the government of President Macron wishes a warming of relations between France and Russia, an exclusive survey to know the opinion of the French about their vast “neighbor.”

Survey realized online and on mobile between the 26th August and the 02nd September 2019 on 1,000 French, aged 18 years and more and representative of the French population.

Promise Consulting, a consulting firm, and Panel On The Web, a market research institute, surveyed an online panel to gauge French opinion about Russia (the country, the people, the culture, and the political system). The following objectives were assigned to the opinion survey before a press release on French-Russian relations and opportunities for in-depth political, cultural, and economic collaboration.

- To assess the proximity or distance of the French to Russia, and the reasons why they feel close to or far from Russia.

- To evaluate the French opinion on the relations between Europe and Russia, on the European sanctions and the subsequent Russian embargo on European food products, in the wake of the events in Crimea.

- To assess the French opinion on the relations between France and Russia: state of play and desired areas for improvement.

The opinion poll was conducted in the wake of G7 Biarritz summit, marked by the previous meeting between the Presidents Emmanuel Macron and Vladimir Putin at the residence of Brégançon. The main results are analyzed below.

To download in ENGLISH language in WORD and PdF

To download in RUSSIAN languages in WORD and PdF

To download the excerpt of slides in HD (see below):

To publish these results on social networks: 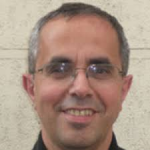 THE EXPERTS’ POINT OF VIEW

Philippe Jourdan and Jean-Claude Pacitto, the authors of the study, give here their testimony and analysis on the main lessons of the survey. If the French seem to stand at a certain distance from Russia, the majority wishes to maintain good relations between our two countries, and fiercely hope they improve in many areas

Russia wakes lively debates in the media, fed by alarming international news. However, the opinion of the French people about Russia is much less known. How do our citizens perceive Russia? How do they apprehend current and future French-Russian relations, in the context of diplomatic warming desired by the two Presidents, Macron and Putin?

Is Russia for the French a European State? Do the French people share the Gaullist vision of a Europe stretching from the “Atlantic to the Urals”? The opinion is almost equally shared: 39% consider that Russia is not a European state against 37% who think the opposite, perfect illustration of the allegory of the two-headed Russian eagle, a head turned towards the West, another to the East. The reasons given are not of the same nature: those who answered “yes” emphasize geographical, historical, and cultural proximity, while those who answered “no” mobilize political antagonisms (between our regimes). These political arguments (suspected lack of freedom, autocratic government, …) transcend the political affinities.

While most of the French people are aware of the European economic sanctions (and their counterpart, the Russian embargo on European food products), they are still 4 out of 10 (41%) to ignore their existence and their purpose. Those who ignore the most of these sanctions are the sympathizers of the radical left “France Insoumise” (LFI). At the same time, the LFI sympathizers are also the most numerous to consider Russia as a “threat” (51%). The expressed fear strongly embodied (if not fantasized) around the personality of Vladimir Putin (91%), contrasts with a lack of knowledge of the facts likely to objectify it. The same conclusion applies to a lesser extent to the other political currents.

In the end, only 28% of the French people are strongly convinced of the worthiness of the European economic sanctions, and it is the sympathizers of the moderate right (“Les Républicains”) who are the most dubious (51%).

FRENCH-RUSSIAN RELATIONS: FRANCE CAN DO BETTER

THE FUTURE OF THE FRENCH-RUSSIAN COOPERATION: A MOBILIZING ISSUE

Supporters of a positive dynamic are more likely to be recruited from LREM (“La République en Marche”) (56%) and LR (“Les Républicains”) (55%), and not, contrary to a view too often held, from radical-wing supporters (“Rassemblement National”) (44%). Once again, our opinion survey reveals an odd paradox: radical left-wing supporters (LFI, “La France Insoumise”) are more numerous to think that Russia is a threat (51% vs. 44% of the population), but at the same time, they are also more likely to want that French-Russian relationship improves (94%). This result is essential, which reveals that opinion is not fixed and that it is likely to change quickly. The context, linked to recent international events, weights easily on the French judgment about Russia. In the future, it can be assumed that the divisions will fade, as the conflicts that have generated them (Syria, Ukraine, Crimea) will decrease in intensity on the ground, and consequently in the media.

The potential for improving French-Russian relations is high and multi-faceted: the French prioritize environmental issues, humanitarian cooperation, bilateral foreign policy, and economic contracts, because of results deemed unsatisfactory in these areas. However, most cultural matters (university exchanges, scientific collaboration, tourism, and artistic exchanges) can also be improved. 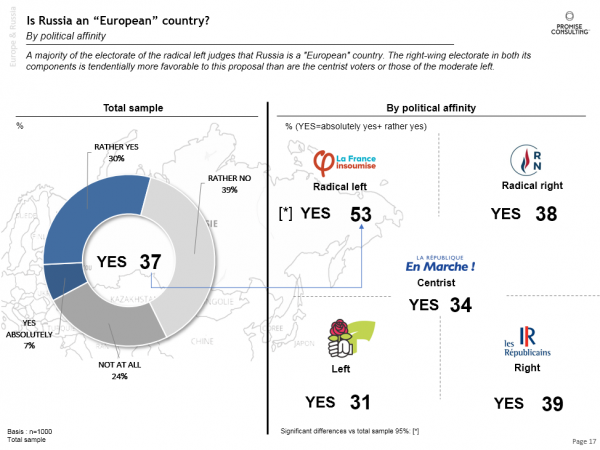 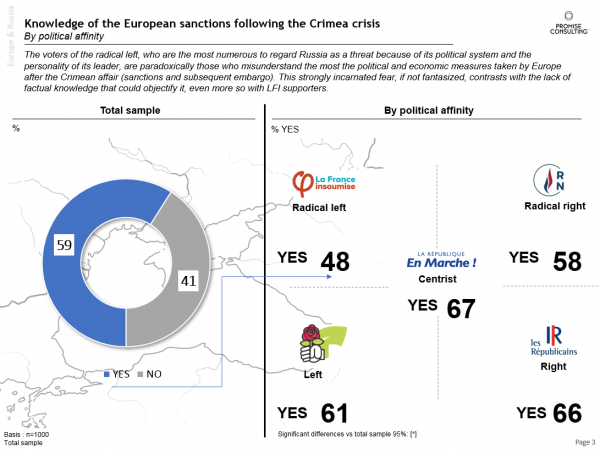 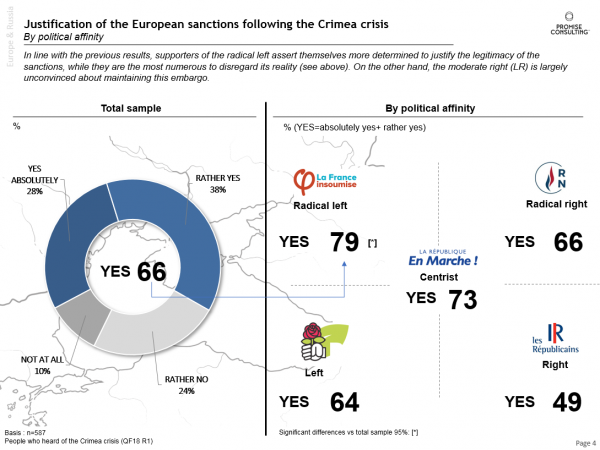 FRENCH-RUSSIAN RELATIONS: FRANCE CAN DO BETTER 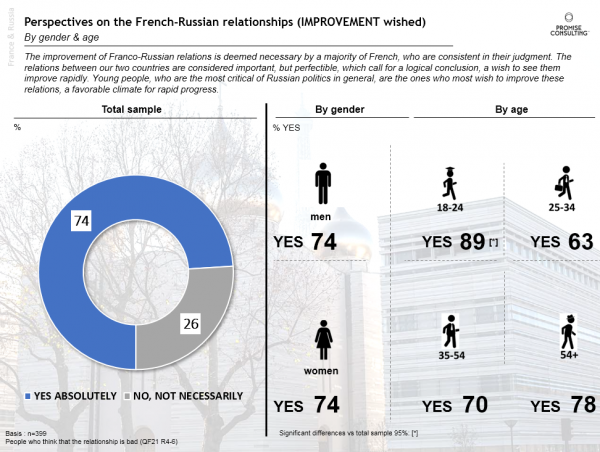 THE FUTURE OF THE FRENCH-RUSSIAN COOPERATION: A MOBILIZING ISSUE 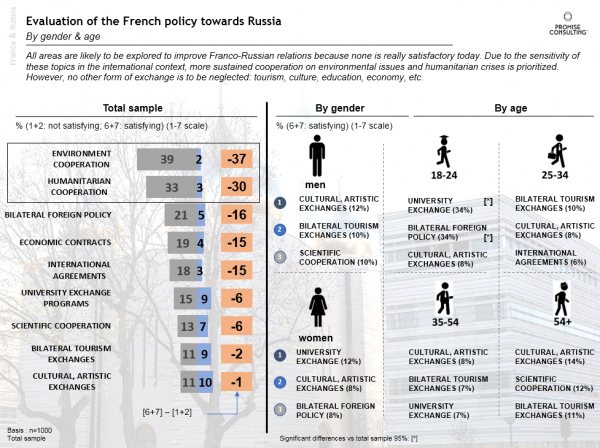 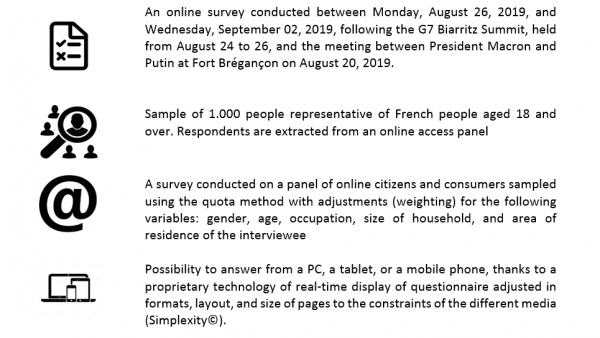 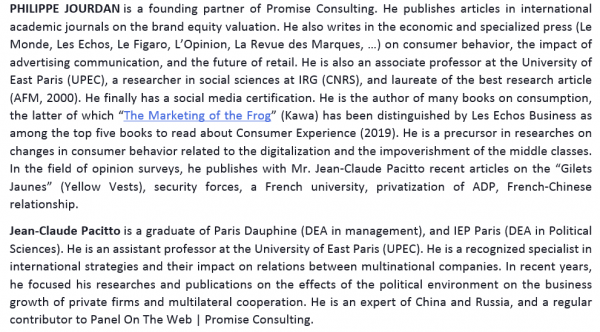